Most modern Diesel vehicles will come fitted with a Diesel Particulate Filter (DPF). This can also be called an FAP.

If you get a warning message telling you to 'unblock diesel filter' then it is likely you have a problem with your Diesel Particulate Filter. These are designed to 're-generate' using an oil called Eolys Fluid. Alongside a late 'post injection' of fuel this will raise temperatures inside the DPF and burn off any soot. 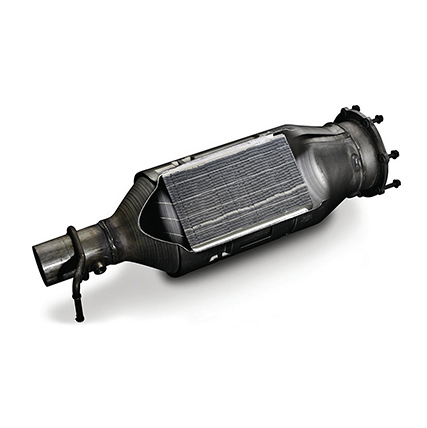 If you don’t reach the desired conditions for the DPF to ‘regenerate’ or if there is a fault with your vehicle, the DPF will become clogged. If the DPF becomes clogged you will lose a lot of power as the exhaust flow will not be high enough to spool the turbine of the turbo charger. This starts a degenerative cycle of increased smoke/soot which results in the DPF becoming more and more clogged. Eventually you will need to replace the DPF because it is not possible to regenerate to a usable state. When problems occur it’s best to fix them immediately.

For most older vehicles the cost to repair or replace a faulty DPF system can be greater than the value of the vehicle, this is why most people decide to remove the DPF as it is more efficient than scrapping an entire vehicle.

In most countries, removing the DPF will make your vehicle illegal for road use, if you chose to do this, it is at your own risk and we recommend off road use only. For track and motorsport use, the best option is to fit one of our DPF delete pipes. This does not require you to hollow your DPF and render it useless, instead you can install the DPF delete pipe and refit the original DPF to make your vehicle road legal again.

Alternatively, a completely blocked DPF can be hollowed if it is unservicable.

We do offer a ‘DPF friendly remap’ which is designed to run with similar AFR to the stock mapping to prevent your DPF from clogging. This is a great option if you want to gain a bit of power without removing the DPF system. This does require that there are no problems with the DPF system prior to remapping. Another benefit is that you remain within regulations. These DPF safe settings come as standard in all our Stage 1 remaps which are designed for road use on stock components.

Many garages will offer to regenerate your DPF filter. This is done with the engine running and the vehicle stationary. The ECU is told to bring the DPF to a very high temperature, sometimes in excess of 900C. Flames will come out of the exhaust system, and the engine will suffer from a lot of heat soak, especially your turbo charger. Some vehicles have been known to actually catch fire during this process. As such, we DO NOT recommend doing this, as it is not good for the vehicle, and often does not work.

How to tell if a DPF is fitted to your vehicle?

If you have a warning on the center console of ‘anti pollution fault’ this DOES NOT necessarily mean that there is a fault with the DPF or EGR. In-fact, on the Peugeot and Citroen vehicles this is a generic warning for any kind of fault and does not point to any of the anti pollution systems. This fault message can indicate any engine related fault. To find the cause you must go to your nearest garage and have them read for fault codes. This will pinpoint the exact fault. A DPF fault will typically display ‘UNBLOCK Diesel filter’.

Alternatively you can buy ELM327, Peugeot Planet 2000 or LEXIA. This will give the ability to read for fault codes yourself and save a lot of money. This equipment is available from ebay, and is not something we sell..

Here you can learn more about our services.

Pay for products and tuning upgrades.

Program your ECU from home with our simple online service.